Total Travelnet is descended from Sokomine's Minetest "travelnet" mod v2.2 and v2.3 plus the Lord of the Test version of the "palantiri" mod and the "tpad" mod. 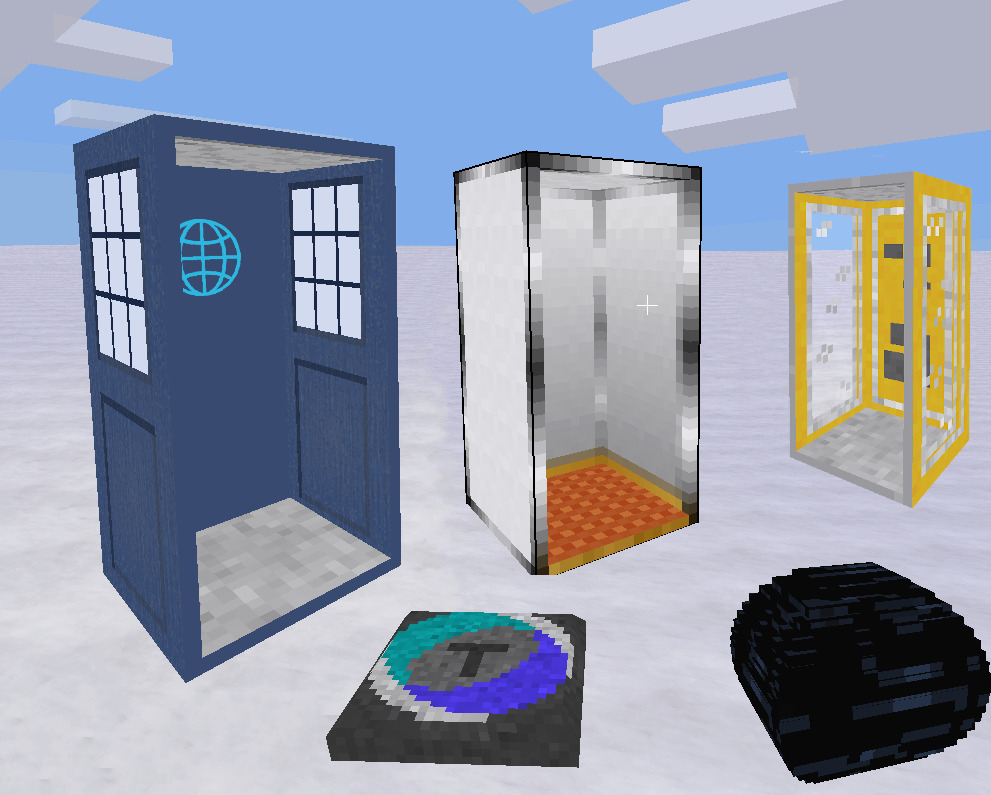 * No Punch Updates. If the standard Travelnet Repair ABM is enabled, there is no longer a need for players to left-punch on travelnets to update the target lists.

* Sane Sort. This mod sorts “travelnet” target lists in alphabetical order. However, you can enable the old sort algorithm if you'd like to do so.

* Mapgen Tour. This is a mapgen-related tool that is useful for advanced world hosts.

The word “palantiri” is singular or plural. A palantiri is an alternative travelnet that resembles an unobtrusive obsidian rock.

Palantiri and regular travelnets may be used at the same time in the same world. They share the same travelnet networks.

If a player teleports to a palantiri, he materializes on top of it. So, the vertical space set aside for a palantiri must be at least 3 nodes tall, counting the 1-node rock at the bottom.

The node name for a palantiri is “travelnet:palantiri” (with the alias ”palantiri” supported).

The node name for an elevator is “travelnet:elevator” (with the alias ”elevator” supported).

This mod allows you to select a travelnet theme using one of the following “world.conf” settings:

Travelnets that were palantiri to begin with remain palantiri regardless of the theme setting.

Players materialize on top of palantiri. The vertical space required for a palantiri is therefore 3 nodes, counting the 1-node rock at the bottom.

However, regular travelnets are only 2 nodes tall. So, if there's a ceiling right over any of your standard travelnets — which is common — you shouldn't use the “palantiri” theme or players will materialize with their heads in the ceiling.

Note that it's all right to use actual palantiri regardless. You just shouldn't use the theme setting to change regular travelnets into Palantiri unless each of them has adequate vertical space.

* Total Travelnet includes a useful tool named Mapgen Tour. This tool can be used to accomplish tasks related to mapgen of scattered areas. Details are discussed in Appendix B.

* Target lists are now sorted alphabetically. However, the legacy sort algorithm can be enabled by the following “conf”-file setting:

* Most travelnet formspecs now include a “Remove” button.
* Merged a Poikilos “y-offset” change. This seems to fix a “travelnet” bug related to “fly”.
* Replaced sound effect with a “transporter” sound.
* Most features are now controllable by conf-file settings. To be documented.
* Removed flash effect for now as it doesn't seem to work.
* Total Travelnet supports auto-rotate of players on both old and new servers.
* The arrival sound now starts earlier (timing is more realistic in some cases).
* A “safe write” routine is used if it's available but is *not* required.

* If the travelnet repair ABM is updated, players no longer need to left-click on travelnets to update target lists.

Recipe for a regular travelnet:

Place a travelnet; i.e., a regular travelnet, an elevator, a palantiri, or a travelpad.

Enter name of the station (e.g. “my house”, “center of desert city”) and name of the network (e.g. “Megaville”, “my buildings”). Elevators have fewer fields. Press “Store”.

Punch it to update the list of stations on that network. This isn't necessary if the Travelnet Repair ABM is enabled.

To teleport, right-click and press the appropriate target location button.

An unconfigured travelnet box can be configured by anyone. If it's misconfigured, press the “Remove” button and place it anew.

This section, and the feature that it discusses, is/are for advanced world hosts.

The feature in question, Mapgen Tour, can be used for multiple purposes. We'll start with a world capture problem.

Suppose that you've done a Minetest world capture and that you haven't overlaid the captured mapblocks onto fully mapgenned territory. Instead, the mapblocks are floating in territory that remains to be mapgenned.

However, if you turn on mapgen, your captured mapblocks will be partly or completely destroyed.

The Mapgen Tour tool can be used to solve the problem.

It's in “travelnet”, at least for now, for historical reasons and because the problem is often visible in captures that include travelnets.

The solution is as follows:

* Make an SQLite3 file that contains your capture. Call it ”capture.sqlite”. Copy “capture.sqlite” to “map.sqlite” in the world under construction. If you're working under Windows, be sure to make it a binary copy.

* Add the following settings to “world.conf”:

These are mapgen distances relative to coordinates that we're about to come to. The units for these distances are nodes as opposed to mapblocks.

* Edit “restorenet.lua” and look for the following line:

Warning: Don't include any coordinates that are further out from 0,0,0 than 30,500 nodes in any direction. This will cause errors or lockups. Repair of regions that are close to the edge of the universe is a subject for another time.

You can have from 1 to 500 of these lines. Be warned that any number over 100 may involve significant processing time. 500 might take one or more hours.

500 lines will probably mean an output file of 2GB or more.

* You'll be teleported to each location in turn. There will be a delay of 5 to 10 seconds at each location. What's happening is that each of the locations is being mapgenned.

You should now have a non-self destructing copy of the captured world.

Similar procedures can be used in other cases where mapgen of a set of specific areas is required.

This feature can also be used to provide a simple automated tour of a world. Important: In this use case, you should set the ”travelnet_mapgen_...” parameters to 16 each (or to any small positive integer).